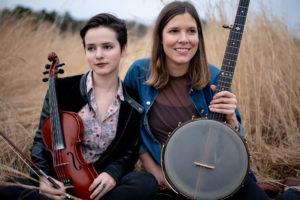 Already leaders in the young generation of roots musicians, de Groot has become known for her intricate clawhammer banjo work with Molsky’s Mountain Drifters, while Hargreaves has brought her powerhouse fiddling to the stage with Gillian Welch and Laurie Lewis.

Their new album on Free Dirt Records is a powerful opening statement that has been called “a big step forward” (CBC Q) and “dives deep into the old-time style and comes up with something wonderfully fresh” (Vinyl District).Ranging from intricate banjo-fiddle instrumental performances inspired by early commercial and field recordings to more contemporary tunes and songs from the likes of Judy Hyman (the Horseflies) and Alice Gerrard, their repertoire reflects on which voices we seek to hear as we explore the expansive, diverse canon of American roots music. Their rendition of Alice Gerrard’s song “Beaufort County Jail” is included in Rolling Stone Country’s “10 Best Country and Americana Songs to Hear.”

“de Groot and Hargreaves have used their platform to broaden our horizons, both of the music our forebears created and the causes they sought to advance in their art.” ~No Depression

“two of the foremost old-time virtuosos on the scene today, executing these timeless songs and melodies with a clean and straightforward approach that sacrifices neither innovative thought nor modern embellishments to do so. ” ~ The Bluegrass Situation
General Admission- Doors open at 7:30/ Music starts at 8pm
Pre-Sale- 15.00/ Day of show- 20.00
PURCHASE TICKETS ON EVENTBRITE