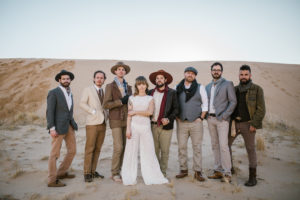 Get Ready! Dustbowl Revival is rolling into the G.A.R. Hall on November 22nd!
November 22nd-Dustbowl Revival– Dustbowl Revival is an Americana Soul band with eight full-time members who mash the sounds of New Orleans funk, soul, pre-war blues, and roots music, into a genre-hopping, time-bending dance party that coaxes new fire out of familiar coal.
The band was founded in 2008 in the bohemian enclave of Venice Beach, California. In the following years, Dustbowl has become known for their free-flowing and joyous live shows, combining their funk rhythm and brass section with a fast-picking string band section – opening for bands as diverse as Lake Street Dive, Trombone Shorty and The Preservation Hall Jazz Band, touring China as a guest of the state department and headlining festivals like Delfest, Floydfest, Hardly Strictly Bluegrass, and recently Bergenfest (Norway) and Tonder Festival (Denmark).
Over the past few years, Dustbowl Revival has been making a name for itself with a vibrant mix of vintage Americana sounds. Critics have proclaimed that this eclectic eight-piece “would have sounded utterly at home within the hallowed confines of Preservation Hall in New Orleans’ French Quarter” (Los Angeles Times) and their “upbeat, old-school, All-American sonic safaris exemplify everything shows should be: hot, spontaneous, engaging and, best of all, a pleasure to hear” (L.A. Weekly). Rob Sheffield, in Rolling Stone, hailed them as a great band “whose Americana swing was so fun I went back to see them again the next day.
Excited to welcome Dustbowl Revival to the G.A.R. Hall…they are sure to make you smile!
General Admission
Doors open at 7:30/ Music at 8pm
Pre-Sale- $24.00/ Day of show – $29.00
THIS SHOW IS SOLD OUT!!!  THANK YOU SO MUCH!