The Speedbumps weekend at the G.A.R. Hall 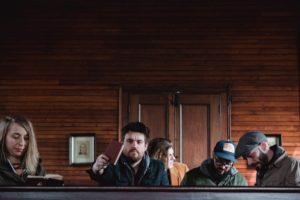 December 6th, 7th and 8th- The Speedbumps are an award-winning American band with a warm, authentic sound, built on a passion for hollow-bodied instruments, indie-folk and indie-rock influences, and singer-songwriter Erik Urycki’s breathy, commanding vocals and canny phrasing.

The band’s roots lie deep in the Rustbelt, where quiet strength and limited embellishment define the culture. The working class towns around Akron, the former rubber capital, from which artists like The Black Keys, The Pretenders, and Devo have emerged, have provided the band with an aesthetic that seeks to tease out beauty from the gritty details of everyday life.

While the band cites influences from Paul Simon to Nick Drake to Radiohead, their material and vibe have more in common with festival favorites like The Decemberists, Wilco, or My Morning Jacket with their consistently smart, spare and rootsy approach.

All three shows of the Speedbumps are SOLD OUT!!!  Thank You!
Doors open at 7pm/Music at 8pm
See you at the Hall!