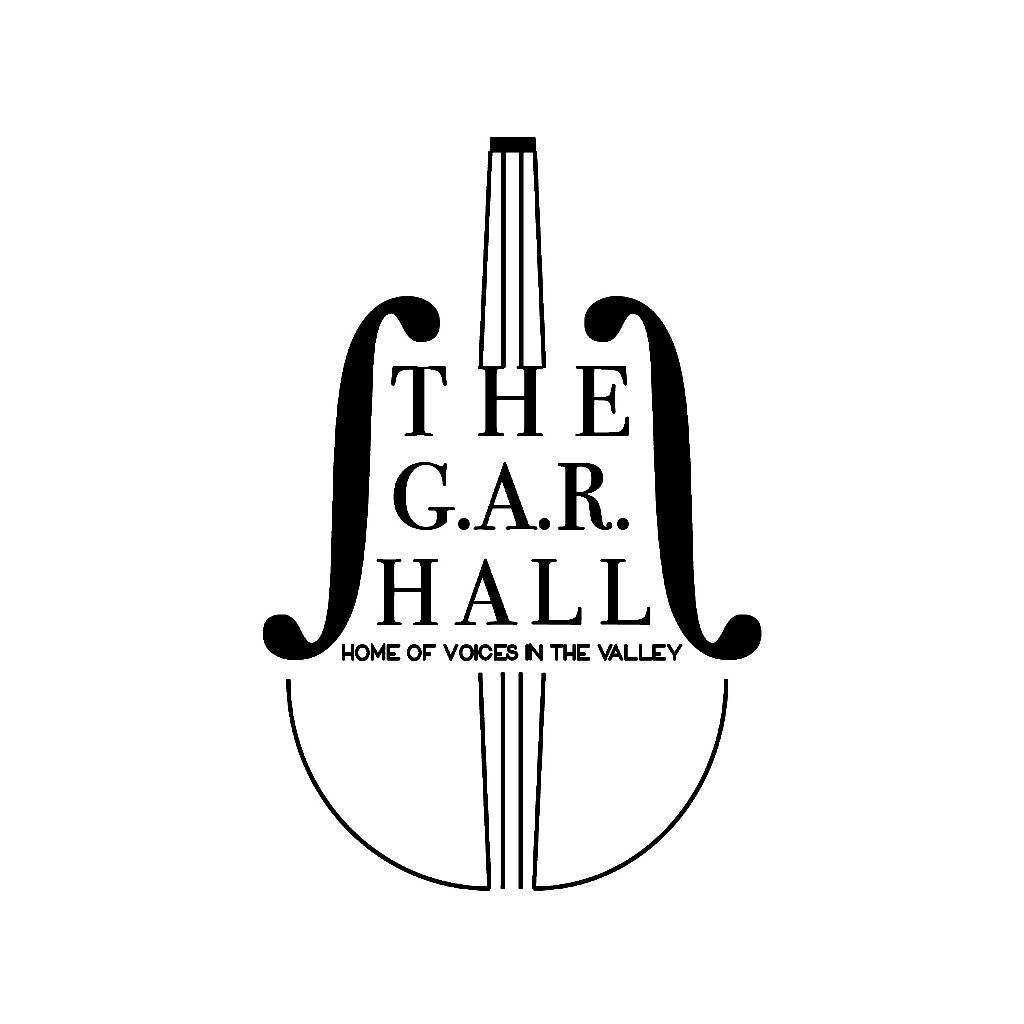 The Peninsula Foundation supports the Arts Community by presenting Voices in the Valley, a showcase of traditional roots music. So kick back, relax and join us for a night of music in the Historic G.A.R. Hall. Beer, Wine and adult beverages available.

Parking for the G.A.R. Hall is located directly across the street on the South West Corner of Route 303 and Riverview Road. There is handicap parking located directly in front of the G.A.R. Hall. Alternate Parking can be found 1 block away at the old Yellow Creek Trading Company.  Or at Riverview Court (old Ohio Hardwoods) on the Southeast Corner of the intersection of Route 303 and Riverview Road. Parking in Peninsula is always at a premium so if you are coming with friends, consider sharing a ride.  Thanks!

If you are looking for a way to sponsor the arts, please consider helping support the Voices in the Valley music program at the historic G.A.R. Hall. Operated by the Peninsula Foundation, this program features local and national touring musicians in the intimate setting of this beautiful, grand old hall. Your donation is tax deductible and very much appreciated. Thank you in advance for supporting the arts and arts programming in N.E. Ohio!! 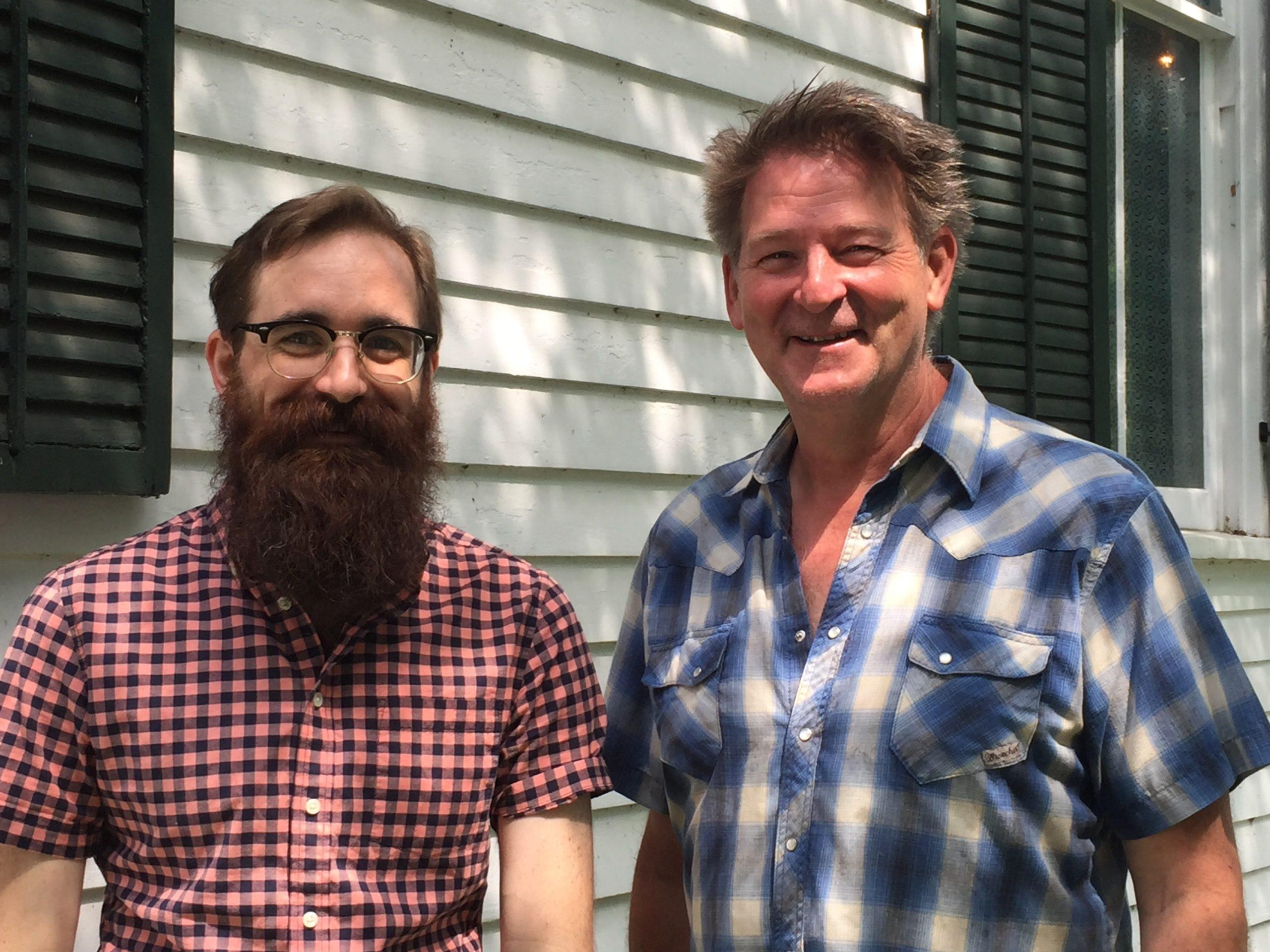 The Bluegrass Gospel Hour at the Bronson Church

Hosts Paul Kovac and David Mayfield play some of your favorite Bluegrass gospel tunes mixed with some fun banter!  This is not a church service, rather a meeting of the Bluegrass faithful looking to enjoy some fellowship with two of the area's favorite pickers!

This series is temporarily suspended.  We will give plenty of notice when we start this series again.

Truly sorry for any inconvenience, we too are excited to begin our Bluegrass Gospel Hour again. 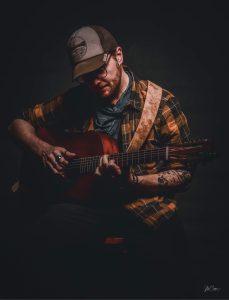 THIS EVENT IS SOLD OUT!
Ben Gage brings his band to the G.A.R. Hall on November 25th to celebrate their new recording. Known for his songwriting, his doodles! and his work to connect area talent to audiences, Ben has become a favorite with listeners and musicians alike. Join us! 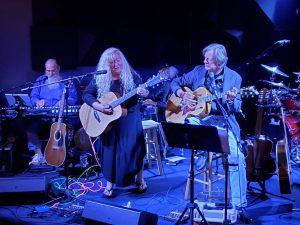 December 2nd - Up'Til 4 come back to the Hall and we can't wait. Come help us welcome them back!

Up 'Til 4 is a band dedicated to acoustic / rock music from the singer-songwriter era of the 60s and 70s through the modern indie-folk music of today. The group covers the music of Buffalo Springfield, Byrds, Crosby, Stills, Nash and Young, Jackson Browne, Eagles, James Taylor, Sheryl Crowe, Joni Mitchell, Gillian Welch, Grateful Dead, Traveling Wilbury's as well as original music.

This group has sweet, sweet harmonies and they will have you singing along with every tune. 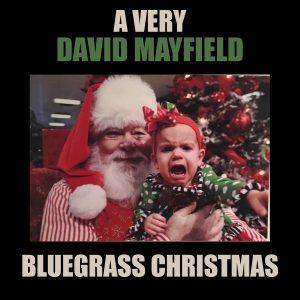 December 3rd- A Very David Mayfield Bluegrass Christmas! The first show sold out so quickly, we just had to add another!

It's time to put a jingle in your jangle and get down to the Hall for A Very David Mayfield Bluegrass Christmas. Join us for some Christmas fun as only the David Mayfield Parade can deliver. Always one of the highlights of the Holiday Season!

Friday, December 9th- Join us as we welcome Armchair Boogie and Fireside Collective in a tour they are billing as Armchair Collective and what we are promising to be a whole lot of fun!!

Armchair Boogie- Starting in 2015 from a front porch in the college town of Stevens Point, Wisconsin. Armchair Boogie can be defined by their pickin’ skills and infectious grooves. Augie Dougherty (banjo, vocals) and Ben Majeska (guitar, vocals) began playing under the name before becoming complete with the addition of Eli Frieders (bass) and solidification of Denzel Connor (drums) as the driving rhythm section behind a bluegrass, up-tempo, jammin-funkgrass outfit. 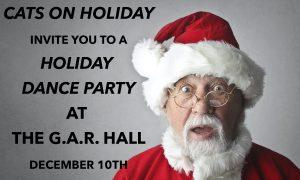 December 10th - Dust off you dancing shoes and head on down to the G.A.R. Hall for a Holiday Dance Party with Cats on Holiday. Join Cleveland's favorite pop swamp band as they bring out the button box and get you up on the floor to celebrate the holidays. Always a good time when the "Cats" are in the building, but especially this time of year as we celebrate the season. There will be a limited number of seats sold so that we can make a little room for a dance floor, so don't wait! 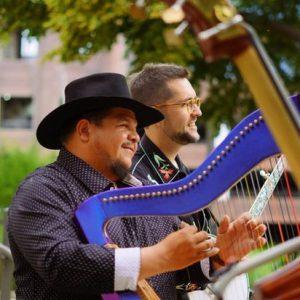 December 11th- Larry & Joe - Larry Bellorín hails from Monagas, Venezuela and is a legend of Llanera music. Joe Troop is from North Carolina and is a GRAMMY-nominated bluegrass and oldtime musician. Currently based in the Triangle of North Carolina, both men are versatile multi-instrumentalists and singer-songwriters on a mission to show that music has no borders. As a duo they perform a fusion of Venezuelan and Appalachian folk music on harp, banjo, cuatro, fiddle, guitar, maracas and whatever else they decide to throw in the van. The program they offer features a distinct blend of their musical inheritances and traditions as well as storytelling about the ways that music and social movements coalesce.

“It is my belief that music is one of the most powerful and effective buoys for hope.

It is also my belief that no one is doing this better than these two artists. They work together to weave a sonic tapestry that foretells a different future for our world, one of unity, love, prosperity, and mutual respect.”

“Joe is an impressive person and an impressive talent,” says banjo legend Béla Fleck, a regular collaborator. “He’s passionate, cares deeply about injustice in the world and he’s not afraid to take a stand. Combine that with his amazing abilities as a multi-instrumentalist, vocalist and composer, and you’ve got a powerhouse.” 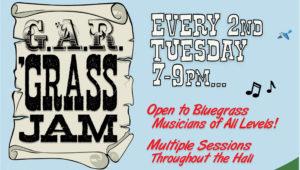 Grass Jam is BACK! Paul Kovac and David Mayfield will be your hosts. All ages and skill levels are welcome and encouraged. We have 3-5 separate break out rooms so you can pick your jam. You are welcome to bring your own food to munch on, the bar will be open.

$5 donation at the door

It's time to put a jingle in your jangle and get down to the Hall for A Very David Mayfield Bluegrass Christmas. Join us for some Christmas fun as only the David Mayfield Parade can deliver. Always one of the highlights of the Holiday Season! 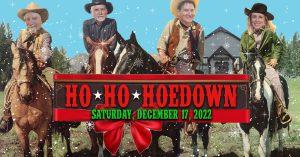 December 17th- Tall Paul & Western Drawl - Carrying on the tradition started by Hillbilly IDOL some twenty years ago, Tall Paul rides into the GAR Hall, presenting an evening of their own holiday-themed music in the western style, with special guest appearances and fun gift giveaways. A sure sellout so get your tickets early. 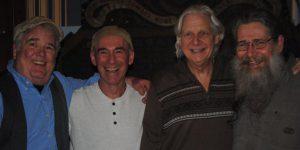 December 18th - Four Songwriters in the Valley- I look forward to this show every year and it never disappoints. Join us for a special evening of song between four friends, Charlie Wiener, Jon Mosey, Jim Ballard and Alex Bevan. These 4 songwriters have a treasure of tunes to share, what makes this special is they perform each others songs in a round robin setting. It is always a wonderful night, filled with great music, great stories. 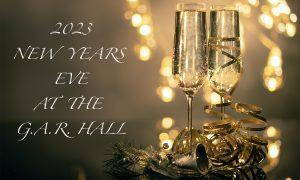 December 31st-New Years Eve at the G.A.R. Hall - Join us to ring in 2023 with music from Rachel Brown & The Beatnik Playboys and Becky Boyd and the Groove Train!! Two of Cleveland's favorite front ladies and their bands (along with some surprise guests) are ready to usher in the New Year with you and your friends.

Rather than a formal dinner, we are going to keep it light and groovy with an incredible ecrudite board on each table, an assortment of sandwiches and snacks to enjoy and then we'll top it off with some incredible desserts! Each table will have a bottle of champagne for toasting at midnight!

Doors open at 7:30/ Music at 8pm
Purchase Tickets on Eventbrite

January 13th- The Brother Brothers- “the warm harmonies and silky melodies of identical twins David and Adam Moss evoke the kind of ’60s-era folk tunes that reverberated through dark, wood-paneled bars in the Village… If these brothers aren’t among the Americana Music Association’s nominees for Emerging Artist or Duo-Group, I want a recount.” - No Depression

Excited to have David and Adam journey back to the Hall to celebrate and share their new album "Cover to Cover". 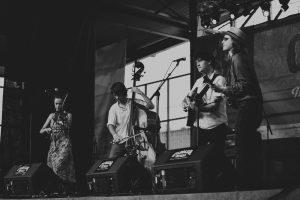 January 22nd -Hawktail is the instrumental acoustic quartet of fiddler Brittany Haas, bassist Paul Kowert, guitarist Jordan Tice, and mandolinist Dominick Leslie. Though at first glance it looks like an acoustic superpicker side-project, their all-original music is cohesive and unique, distinguishing them as an ensemble with a sound built from the ground up. Flush with orchestral sweeps and sparse vigils, with strains of the American South and the North Atlantic, this cosmopolitan sound is not what you'd expect from a string band.

Each member of Hawktail brings a strong individuality to the project. Haas, whose 2004 self-titled release instantly became the touchstone for a generation of old-time fiddlers, has since lent her sound to Crooked Still, Live From Here, Steve Martin, and David Rawlings, where she played alongside Kowert, well known as the Grammy-winning Punch Brothers' virtuosic bass player. Tice is a rare guitar player whose music showcases his unique identity and a particular knack for song and tune-writing, and Leslie is a versatile mandolinist whose rhythmic sensibility has made him ubiquitous on the acoustic music scene for over a decade. However, despite each of their ability to contribute to many musical situations, something special happens when they unite as Hawktail. Together, they have fostered a reputation as a rare ensemble of composers and instrumentalists able to take the listener on a journey, without the use of words.

These shows going on Sale Soon
Check back often for more updates!

December 2nd, 3rd and 4th -
The Speedbumps- this show has been postponed.  Stay tuned for a new date.

What are my transportation/parking options for getting to and from the event?
Parking for the GAR Hall is located on the Southwest corner of Route 303 and Riverview directly South of the 303. Overflow parking can be found on the Southeast corner of 303 at Riverview Court or at Peninsula Antiques at 1685 Main Street

Parking for the Bronson Church Green is in the G.A.R. Hall with a short walk East to the Green or at Peninsula Antiques at 1685 Main Street.  Please refrain from parking on Center Street.

How can I contact the organizer with any questions?
The office phone number is 330-657-2528

What’s the refund policy?
full refund between 7-10 days prior to event

Thanks so much to the Ohio Arts Council for their continued support of the Arts Programming at the Peninsula Foundation, including
Voices in the Valley

Thanks so much to the Akron Community Foundation for their support of Arts Programming at the
G.A.R. Hall