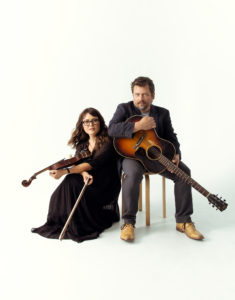 “From the beginning, our goal was to work on these songs to be as strong as they could be, just the two of us,” Sara explains. “And with a few exceptions on the record, that’s really how things were.

Moving from one landscape to the next – literally and musically — is nothing new to Sean and Sara Watkins, who have performed separately and together for nearly their whole lives. Growing up near San Diego, they played countless shows at a local pizza place in Carlsbad, California, with their childhood friend, Chris Thile. As young adults, those three musicians broke out nationally as Nickel Creek, an acoustic ensemble that sold millions of albums, won a Grammy, and toured the world.

“It felt really good to dig into the potential of two people,” Sara says. The arrangements and the writing were all focused on that. Listening now, I’m really proud of what we did. These are songs that would not have come out of either one of us individually, and it feels like a band sound, like this is what we do, the two of us.” However, brother sister remains exactly that – the result of a brother and sister creating music.
General Admission- Auditorium Seating